It was a crisp autumn day in September, and I was walking my local downtown with coffee in hand. On this particular afternoon, I was accompanied by a person (someone I happened to like a great deal) but someone who liked to … we’ll call it “summarize” other people. He had this obsessive habit; he’d pick out some stranger in the crowd, note a collection of random traits and characteristics, and follow up writing a thesis of this persons story. “See that man, with his hands in his pockets? He’s totally Insecure, trying to hide his power” or “that woman with arms wrapped around waist? Clearly believes she’s huge, even though she’s not very large… but she thinks she is…” And so on the game would go. It reminded me being on an episode of Sherlock, except I wasn’t entirely certain he was as apt as Holmes.

The game was both amusing, and at the same time kind of bothered me. Mostly because I’m a hard-core nice girl, and there was this intrinsic fear these people would somehow be alerted to our conversations. But also, the idea of creating these “fantasy” characters for perfect strangers, as intriguing as it was, seemed to lack gravity. Sure, you can gather an awful lot about a person from the way they walk, the way they dress, and their body language. It’s actually a fascinating study, the kind of insights you can get into a person based on their appearance… but what bothered me was sometimes these thesis statements would jolt impressively close into judgement of the person’s entire character. And summing up someone’s character? Well, it seemed more likely that you’d find yourself in one of those moments like Home Alone where the shovel guy, is cast as the South Bend Shovel Slayer, but actually ends up being a kind grandfatherly type man who is simply a bit of a hermit. It’s like the old adage says, you can’t judge a book by its cover.

On this particular afternoon, when one of these statements was blurring into the character-slamming category, he asked me what I thought? So I told him, “I don’t think about it… Most of the time, I don’t think about other people like that at all.” To which he said, “You’re not very empathetic, are you?” and I said, “what do you mean?” and he said… “well, you don’t try to figure out people.”

And I thought, is that really what you think empathy is? Simply, detective work? It seemed to fall a little short of what I believed about empathy, but wanting to avoid an argument, I just let the conversation drop, and went back to my coffee. Happy autumn afternoon, salvaged. 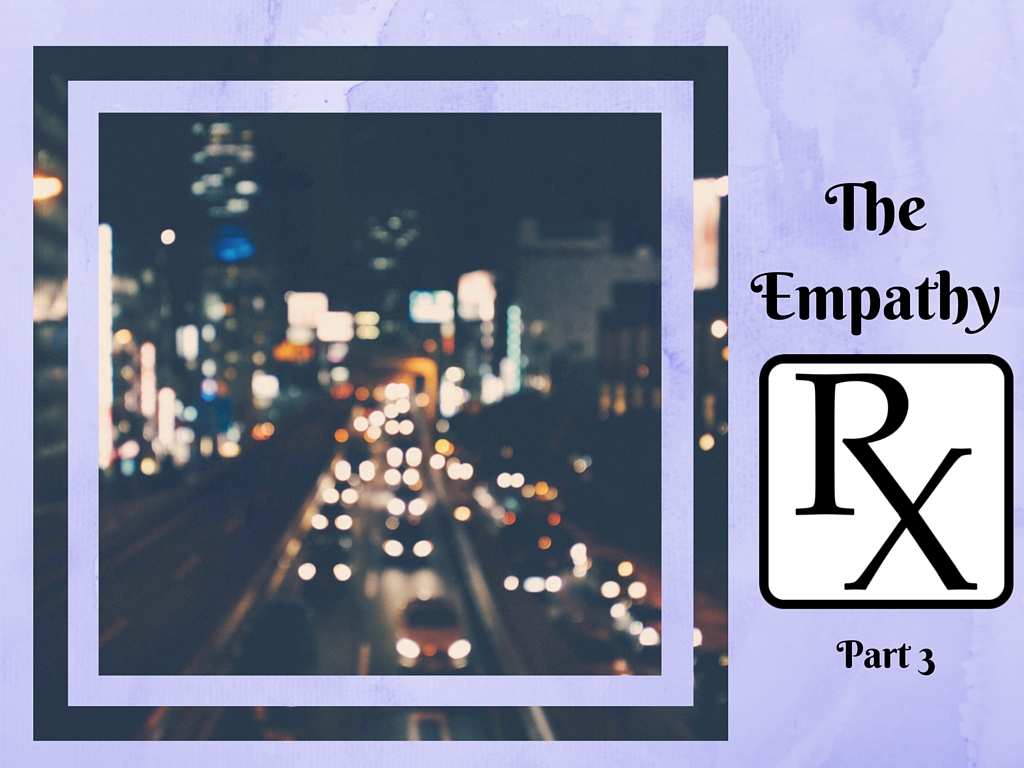 In a previous post, I wrote about how the deepest level of wellness is cultivated in an atmosphere of empathy. Last week, I wrote a follow-up post on how we begin to practice empathy by learning to treat ourselves with more compassion, or what I like to call practicing ‘self-empathy.’ Today I wanted to share some ideas I’ve learned about cultivating and practicing empathy in a horizontal direction, to those people around us.

Empathy is not sympathy. Most of us actually have a decent instinct for sympathy.  According to the dictionary;

sympathy: ‘feelings of pity and sorrow for someone else’s misfortune.’

Sympathy is that cringe feeling you have in your gut, and maybe even a sadness in your heart. But sympathy is feeling bad for someone. It’s an outsider feeling, not one where you relate to the other, but where you make sure to stay on the far side from misfortune. It’s a binary between the blessed and the cursed, the fortunate and the misfortune, the sorrowful and the rejoicing. Sympathy allows us to safely stand on our front porch while we survey the tornado damage that hit the other side of the street.

Empathy is not profiling. Sometimes profiling gets a bad rap, but it’s not all bad. The behavior I discussed in my opening story? That’s profiling. It’s looking at the ally full of drunk motor cycle men who are twice your size, and deciding that as a single woman? It’s not the safest place to be. It can also be called common sense, and it might save your life. It’s the vibe we get when we assess situations and decide what to do with people based on the physical data. Now, as for me personally, I’m not sure every stranger on the street warrants my attention in that way… and it obviously takes on even deeper complexities when it becomes a social issue or an institutional issue. But even on the personal level, I find it time consuming, and I’d rather be in that happy place in my head where it’s just me, myself, and I. But I believe what my friend was doing had less to do with empathy and more to do with profiling. Profiling has its value, and it certainly worked out well for Sherlock. But it’s also not what I’m talking about when I talk about empathy.

Empathy is groking someone else’s situation. It’s seeing the why behind the what. So the woman stands with hands around her waist? She does think she’s huge. Profiling may determine that, empathy seeks to understand why, and then allow that feeling to connect us to her. But also, empathy is difficult to do if you don’t know much about a person. To profile someone? All you have to do is observe their external data. But to empathize with someone? You have to listen to their story. Empathy is a pathway to connection that requires connection in order to happen. As I said before, empathy is a two-way street, both giving and taking with equal measure.

So what have I learned about empathy? Well, I really only have two tips. And I’m still practicing these, and messing them up a lot.

Practice One: Resisting the urge to Silver-line

I’m borrowing from Brené Brown here again, but I really like this thought. Silver-lining is when you hear someone’s story, their pain, their “why  behind the what” moment, but you try to manage the pain by pointing out why it isn’t SOOO bad. You have a cavity? At least you got to go to the dentist. You broke-up with your boyfriend, because he cheated on you? Well, at least you didn’t marry him. Your mother doesn’t treat you very well? At least you have a mother.

Anytime you find yourself trying to respond to someone’s shame, sorrow or sadness with the words “at least?” that’s a bad sign. Silver-lining someone’s pain may make us feel better, but it rarely makes the person’s experience feel more manageable. In fact, in my experience, when I’m the one in the shame pit? Silver-lining usually just makes me feel worse, for feeling bad to begin with.

Practice Two: The Art of Being There

I honestly think this is one of the most genuine and challenging things we can do for another person. It’s simply being there with them while they’re going through whatever they’re going through. It’s not complicated, but it really is hard. I think the hardest thing is empathy requires us to look at our own deep vulnerability, and walk right through it with another.

The good news is? If you can do it? Some of the deepest connections happen when we allow ourselves to relate to others on that level. It’s definitely a practice, but empathy definitely feels worth the effort.

I have long been very skittish and measured when it comes to talking about my faith, and it took me a long time […]

This morning as I opened my Google mail, I was intrigued by an e-mail from The Institute of Functional Medicine regarding a 2012 study published in PLOS ONE. The experiment […]

Here I raise my Ebenezer; Here by Thy great help I’ve come; And I hope, by Thy good pleasure, Safely to arrive […]