So it would seem that certain season of my life lend well to the process of blogging. There are then, those other seasons, where despite my intentions, (isn’t it hell, whose road is paved with the good ones?) the blogging just doesn’t manifest without great effort.  Ok, so excuses aside, I’m in the mood to blog so it’s going to happen.

I remember when I was about 15, scarp-booking became really in vogue. So I got a scrapbook and started making pretty collections of my life…and for about a year I had this amazing scrapbook.  Then something happened…I think it was life, but for some reason I got behind. I kept thinking I should start scrap-booking again but the idea of going back to pick up where I left off was insurmountable, and so weeks turned into months and months into years and then I got a livejournal and forgot about the whole thing. Well here I am again, and it’s been months…and going back to pick up where I left off, would be insane. Thankfully I’m wiser now (I hope) and so I’ll just pick up right here, right now, with a few few notes from the last month or so… nothing too crazy. So without farther ado, 7 snippets from Sunday. 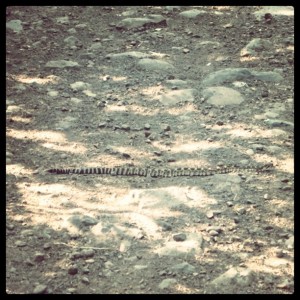 A Critter I Saw:  I’ve always seemed to have an uncanny knack for running into snakes. Last summer I almost stepped on, what I believe was, a bull snake. I’ve almost stepped on a Scarlet King Snake (which in case you don’t know…they look a lot like Coral snakes, only the king snake is the red and black, friend of Jack and not the red and yellow, kill a fellow … thankfully.) I DID step on a blue garter snake once…but so far my snakes have been entirely harmless and non-poisonous…that is until this summer. A few weeks ago I’m walking down the trail and stop about two feet from THIS little friend… I start walking back slowly to give him his space, and that’s when I notice it…yep. There’s a rattle. My first ever rattle snake. Oy. But I survived, and he moseyed on his way. It turned out to be an ok encounter, but I’ll be just fine if we don’t have anymore of that kind…probably ever.

2.) An Idea I’ve been thinking: This is one of those space kind of summers.  My escapism vehicle of choice? Space, the final frontier. THAT my friends means LOTS of Star Trek. I went and saw Into Darkness not once, not twice, but THREE times…and if it had stayed in the theater here longer? There would have been more.  Now that it’s not there, I’ve resorted to watching Next Generation (and I don’t mean to say that like it’s a last resort… cause it is it’s own dish of happy.)

3.) A Quote I keep thinking about: And on the note of Star Trek, there is this line.

“Death is an experience best shared, like the tea.” ~Worf

4.)  A Link I’m obsessed with: www.Wunderlist.com. As anyone who knows me at all knows… I love making list. I’m a dreamer and a planner, and there is nothing more fun then making a list and checking it off.  This site (and app.) is simple and clean…it will sync between my computer and phone, and I’m in love with it.  It is to list making what ‘Envelopes’ is to my bank balance.  Clean, simple and well…’wunderful.’ 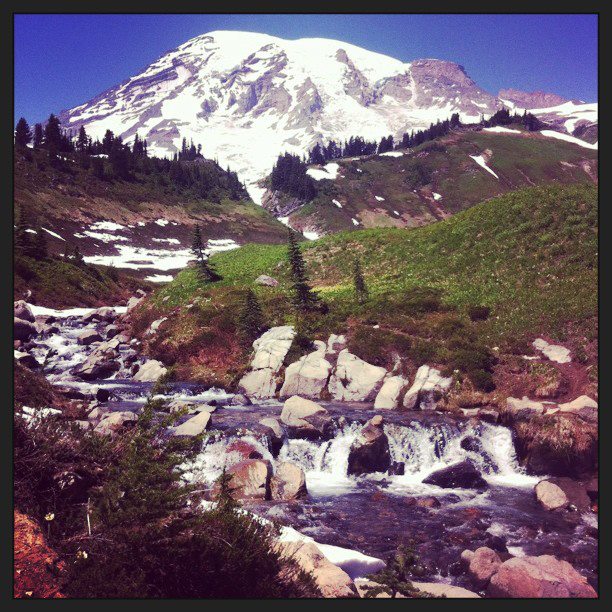 5.) A Recipe I Tweaked: I’ve been bordering on obsession with these cookies. I think I’ve made about three batches so far…there might have been four. I did make a slight variation of the recipe though. Because I prefer peanut butter to almond butter, and because sometimes the cold taste of Swerve annoys me… I did THIS: (which should be noted, adds about 4 carbohydrates per cookie…but I think it’s a worthy taste exchange.)

The dipping sauce I sometimes make, and sometimes don’t; but when I do, I use her recipe for it as is.  One way or another, I think they’re wonderful, and just thinking about them makes me want to make them again.

6.)  The Places I went:  Drove to Paradise last weekend, for my first ever visit. I’ve been to Rainier before, but never this part. I can’t wait to go back, because I’m in love…with a mountain.

And with that thought, I did it. I am posting a for serious, honest to goodness blog. Maybe I’ll be more serious about posting more blogs, on time, for a while…maybe. I can’t say for sure though…*spoilers*