Some years seem full to the brim with blatant evidence of their fruitfulness.  Other years, lots goes on in the inside, but not so much to report on. For me, 2006 was probably one of those years, belonging to the later category.  As I went through the pictures… not a lot going on.  When I think about it though, lots of things happened.  Just not things you can show or document.  I think this might be true of life though; the most important things in life aren’t quite tangible, possibly because the important things belong to another reality altogether.  It does remind me though, as I look at pictures, that appearances are deceiving.  Just because it looks like life is really interesting, doesn’t mean that it’s actually that interesting.  And vice versa. Quiet and dull looking doesn’t equal unproductive. Note this lesson, self.

Nonetheless, I did find a few good ones.  Hardly evident of all the things that went on, but still a dab of nostalgia for 2006. 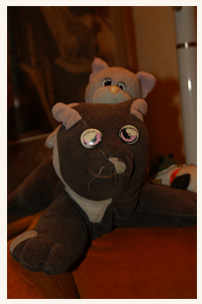 And then when you’re done maybe you can read a nice book.

Ok,  so it is undoubtedly the cheery fall packaging that snookered me in.  I don’t normally go for Peeps (‘I don’t drink Peeps’). […]