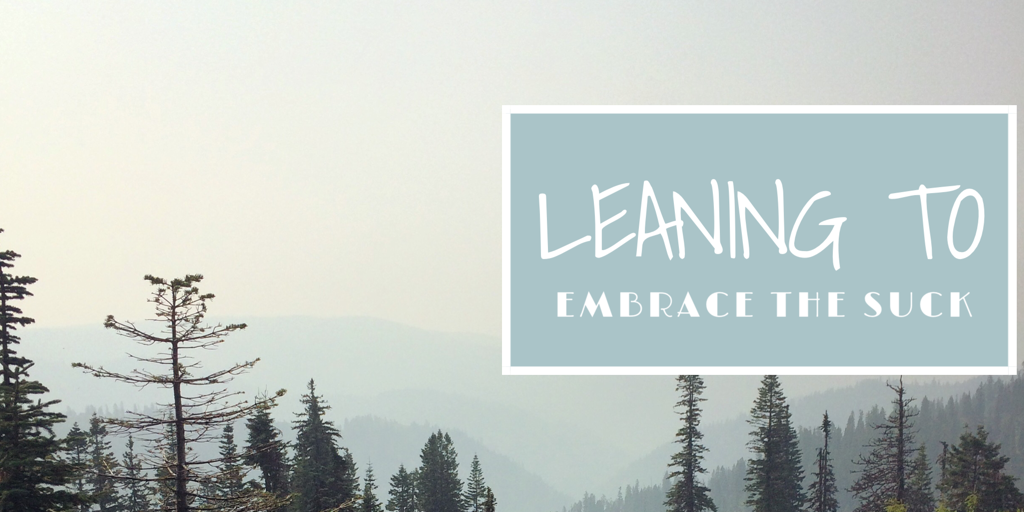 As I might have mentioned, once… or about a hundred times already… I’m a Brené Brown groupie.

A few months ago, I found this recording she did, of a talk called Rising Strong as a Spiritual Practice. The recording is a seminar she gave in Colorado, and covers a lot of the concepts she discusses in her book Rising Strong, however, it also gives some other stories, not told in her book, and some other tips that expand on the topics of the book. So, basically, the kind of thing that a real groupie needs in their library. In the seminar, Brené tells a story about how for one of her work related experiences, she was invited to run a 5K with the participants. Thankfully, I must say, I get the feeling that my sister Brené is as familiar with the art of running 5K’s as I am (i.e., we’re not really the running type.) As she was preparing for the run, she, like myself (and all the other less-practiced-runners out there…), was finding the activity to be less than enjoyable.  So after struggling with the discomfort for a while, she finally decided to phone a friend, and see if he could provide some insight about how to train, so to attenuate the misery of the process. I think the assumption many less-practiced-runners have, is that the runner-types out there must actually have some trick to enjoying the process of running. Seriously, if it’s all miserable, who commits to something miserable? Her friend gave her a few pieces of advice, but his major take away advice for lessening the misery was simply this; embrace the suck. Turns out, that running is miserable for pretty much everyone, at certain points? It’s just runner-types find in that suckage something worth running for… heaven help us… I don’t know what.  But the takeaway? Some things in life are painful and unpleasant, no matter what you do, and in those moments there are really only two choices; stop? Or? Embrace the suck. That is, you just keep putting one foot in front of the other, and carrying on, until things stop sucking quite so bad.

When I heard this at the beginning of the summer, I went home, pulled out a sticky note, slapped it onto my desk, and started writing in large letters, (yes, I made a literal note to myself): Embrace the suck.

I have a bit of a dramatic and romantic personality. I’m introverted enough that I don’t always wear my more dramatic side on display? But the truth is, I’m a slightly quieter, and more introverted version, of Anne of Green Gables. While that does have some bonus’ (and I’m a redhead, so there’s a poetic appeal to that reality?) However, it has it’s downsides too. It means at any given point, on any given year, I’m probably processing something.  There is a possibility that I might break a slate over your head? But it’s honestly more likely to be over my own head, rather than anyone else’s. This internalization tendency also means, I might take anxious and difficult times more to heart, and I might process heartbreak a little more dramatically, than other people. Some people wander through their emotions; I tend to pick them up and inhabit them until they’re threadbare. However, I don’t usually let anyone know. So they’re less clothing I wear, and more like undergarments that no one sees. But all that is simply my response to normal average seasons of life, when nothing dramatic has happened in either my life, or in the world as a whole. But should I manage to work in some actual drama in my life?  Or should the world bring me some actual drama? At those points, even daily routines become nearly unbearable; as Anne says, “I can’t. I’m in the depths of despair.” Those inhabited emotions can become as lead suits, locking me into nothingness. I start feeling like the redheaded, grumpy-cat; nope, nope, nope, becomes my mantra.

And so here we are, towards the end of 2017. And the only way I’ve really been dealing with it, is by remembering that little sticky note to self: embrace the suck.

It feels like everything is extra heartbroken this year. My country, along with my church of origin, are not in one spirit (for their separate and respective reasons). The dissonance, in these places where we’re supposed to find our belonging, instead at times, has felt deafening. My life is in transition (with the grueling pace of graduate school continuing to be relentless, not to mention the impending pressure of finding post-graduation work.) Additionally, I have been dealing with loss; not the kinds you advertise, but the the little loses that grate against your soul. Even small, broken, hopes, can feel like death by a thousand paper cuts. So where does that leave me? The strange thing is, I don’t think I’m at all special in this state. This certainly isn’t the first season where I have felt sorrow, grief, anger or loss; those seasons come, from time to time, to all our lives. But in previous seasons, I frequently felt alone, or isolated in my sorrows. This year I don’t feel unique in my discomfort at all. As I talk to those around me, there are a handful of people, who seem to be in a really great place? But they’re the minority. Most of us seem to be going through something. I’m not sure if this is true, or if age is simply sharpening my awareness? Or if possibly my own heartbreak plus age is heightening my empathy for those struggling around me? But whatever it is, I don’t think my everyday heartbreaks are anything special or unique to this season. So many organizations, along with the individuals who make them up, feel fractured… heartbroken, in their innermost being.

So what do we do, when we have to embrace the suck? There are always going to be seasons of the world that are rockier than others. And it might be signaling apocalyptic doom? But there also seems to be a historical ebb and flow to such times in the history of the world. Furthermore, on a personal level, our lives will clearly have some chapters that are more difficult to endure than others. So what do we do with those times? I think for many years I thought that the only way to deal with the suck, was to re-imagine the suck, and pretend like the suck didn’t suck. “Call the thistle a rose, and be happy pretending as though it’s a rose, even though everyone knows it’s a thistle.” Honestly this approach is less, embrace the suck, and more suck-it-up. But having tried that, I don’t actually think that was entirely healthy. It may sound subtle, but there is a world of difference between embracing hardship, vs. ignoring hardship. While optimism can be an incredible ally, denial is less so. And there is a fine line between these two options.

I think sometimes, what helps me in approaching emotional pain, is to compare it to what would happen with physical pain. For instance, should you have a broken bone, the ideal strategy is not to simply pretend as though it’s not broken, and carry on. Running on a broken bone, only makes the break worse, and means you’re going to spend even more time healing the break. On the other hand, if we simply sit and wallow in the suck? If we get stuck in the break, and we’re unwilling to do any kind of rehabilitation? Would we honestly expect to find our way back to being fully functional? I think we all know the answer to that question. And I know for me, this concept is much easier to comprehend when I think of it in the terms of physical pain. Brokenness can’t be ignore, it must be named and appropriately acknowledged. However, at the same time, acknowledging the break can’t be an excuse to stop moving forward through the pain.  Yes, the break must be healed, but then it must also be rehabilitated. This all takes a lot of work; this is the art of embracing the suck.

In my next post, I’ll talk about a few of the more practical strategies I’m developing to perfect the art of embracing the suck. But meanwhile, I am working to find contentment and joy in having the opportunity to run the race before me. As long as we’re living, the race isn’t over yet. That means as long as I’m here, I’m determined to learn how to embrace the suck when necessary. No, I can’t call it anything other than a thistle. But I can believe that even this field of thistles may have it’s own gifts to offer, and it possibly may even yield a beauty all it’s own. Yes, some of life sucks right now, but I’m holding onto this hope; that there may yet be found a more glorious possibility, even in the process of pain.

Cheers to you lovely,

P.S. Less than a week after posting this, I started reading Option B by Sheryl Sandberg, who as fate would have it, also discusses ’embracing the suck.’ Isn’t it interesting, how frequently, a conversation you’re having suddenly starts showing-up, on repeat, through various unexpected avenues of your life?